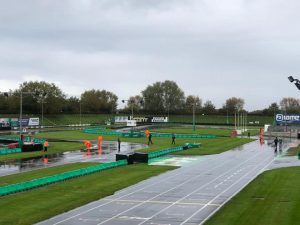 Despite difficult wet weather conditions that affected many circuits in the United Kingdom, it was still business as usual for the penultimate round of the Trent Valley Kart Club Autumn Cup at Paul Fletcher International this past weekend.

Four different ROTAX-powered classes, comprising of a grand total of 70 drivers headed to the Lincolnshire circuit, and would not only battle each other, but also the wet weather that sent a torrent of heavy rainfall over the course of the meeting.

Even though the 11-strong field were running alongside the MINI X30 class, due to the weekend entries, it still would not dampen down the spirits of the youngest Rotax Racers out there. In Timed Qualifying, Coles Racing’s Mckenzie Douglass (#15) would post the fastest time out of all drivers with a 1:16.99. The Project One pairing of Steven Duncan (#16) and Cruz Speakman (#69) ended up completing the top three in class, who were separated by 1.13 seconds after the completion of the session. However, only CHDD’s Mikey Porter (#54) would not be able to make it into the session, as the ten drivers that partook in the session were split by 2.93 seconds overall.

Both Speakman and Douglass would each take the win in the two heats on the Sunday morning, before Speakman took his second successive victory to move up to fourth in the standings, despite not attending the first round.  Dan Holland Racing’s Harry Linden (#21) would end up taking second in the final, ahead of Duncan, whilst initial pole sitter Douglass would only be able to settle for fourth. Four drivers were reprimanded, which included Linden, who was deemed to have changed formation by the stewards and denied victory, as did the #PF of Spirit of Senna’s Luke Ringham. as the pair were handed a five-second time penalty for their infractions. Privateer Ollie Goodyear (#20) would have finished in around seventh place, had he not been handed a five-second front fairing penalty.

Heading into the final round in the first weekend of December, Jamie Perilly (#40) has a slender lead of eight points ahead of Goodyear in second, whilst Lexie Belk (#98) is in third, only a further eight points behind Goodyear, with Speakman and Linden rounding out the top five.

With the most drivers registered out of all four classes, totalling 27, it was definitely a close-quarter affair at the 1,382-metre track. Timed Qualifying clearly showed that grid positions were being separated by mere hundreds of a second. MSport’s Joshua Vallance (#28) was the fastest of all, posting a 1:14.69, just only 0.05 ahead of Mick Barrett Racing’s Hugh Lawrenson. Mattie Hingeley (#11 – Ultimate-R) secured third, ahead of Coles Racing’s Tom Adams (#2) and Kieran Kay (#73 – KR Sport), with all five drivers covered by only one tenth of a second.

From then on, it was the Hingeley show for the remainder of the weekend, as he did the clean sweep of both heats and the final itself. The first heat saw the Ultimate-R driver win from Adams by 4.54 seconds after 8 laps at the 1,382-metre circuit, with Haughton only 0.36 off the Coles Racing driver in third. Rennie and team mate Ryan Willis (#17) would still end up fourth and fifth respectively, before they both had a front fairing penalty post-race.

But it would still keep them ahead of Coles’ Oliver Duffell (#31), who would take sixth. GP plate champion Will Elswood (Privateer) would be excluded, after having been found to have refitted the front fairing post-race.

The tables turned for the rest of the field in the second and final heat, as Will Egby (#77 – Project One) would end up being classified in second behind Hingeley, with Adams being denied another second place result, after being handed a five-second front fairing penalty, dropping him to fifth, behind Edward Matthews (#9 – Coles Racing) and Vallance. Rennie, along with Haughton and Scott Lapsley, would also be given a post-race front fairing five-second penalty, dropping them all to 14th, 9th and 21st place respectively.

Hingeley would cap off the weekend with the perfect flourish to the finish, taking a maximum score in the final, but it was not the easiest of tasks, as Tom Adams was only 0.13 seconds adrift in second, with Harrison Collings (#5 – DHR) taking a well-earned third place, having battled with Haughton and Duffell, who rounded out the top five, who were covered by just 0.96 seconds at the end of 13 laps. Egby, Kitching, Vallance, Rennie and Daniel Armstrong (#12-Privateer) wuld round out the top ten.

Hingeley now has a lead in the standings of 20 points heading into the final round, ahead of Vallance, Rennie and Luis Gardner and James Winter, who rounds out the top five, with there only being 41 points between them.

24 drivers entered into what is normally the most highly-charged class within ROTAX circles, with this race weekend being no exception, having a whole host of British talent that raced both domestically and internationally make up a big part of the field.

In Timed Qualifying, DHR’s Nelson King (#295) took pole position, in what was a very competitive session, with the top ten drivers covered by just 1.74 seconds. James Lingard (#33) and Samuel Harrison (#44) completed the top three, ahead of the KR Sport duo of Jason Lockwood (#58) and last-minute entrant Clayton Ravenscroft (#75). In a session where both Teddy Clinton (#45 – DHR) and Philip Rawson (#39 – CRG GB & Ireland) did not take part in the entire weekend, only two drivers had their fastest times deleted, due to front fairing penalties – Rob Ellis (#17 – RS UK) and Ryan Garvey (#43 – SPR).

But Ravenscroft would sweep the board clean over the three races, with all off them too close to call. The Southampton-based driver would storm his way up to what was the eventual victory in the first heat, ahead of pole sitter King by 0.92 seconds. This was whilst both Harrison and Lockwood found themselves holding station, with Coles Racing’s James Lowther completing the top five. This race also had one third of the field being affected by front fairing five-second penalties post-race, which even saw Ben Burgess (#13) finish in 11th rather than eighth.

Both Ravenscroft and King would again be the ones to chase down in the second heat on Sunday, placing first and second respectively, ahead of Lowther, Lockwood and DHR’s George Holbrook (#60) coming through from tenth to round out the top five. DHR’s Alexander Baker (#47) and KR Sport’s Ben Caisley (#53) would fight their way forward to end up seventh and eighth at the finish, which was further helped by both Burgess and KR Sport’s Tom Edmunds (#15) being handed five-second penalties after the flag for front fairing infractions.

Ravenscroft would take the maximum score of 60 points , having won the final from Lowther by only 0.65 seconds after 14 laps around the 1,382-metre track, with Lockwood making it a KR Sport 1-3. Harrison would be the best of the privateer runners in fourth place, with Holbrook finishing fifth for Dan Holland Racing. It would have been a very different story for Nelson King, who incurred two penalties that denied him the win, which dropped him all the way down in ninth. Henry Ayers (#29 – KR Sport) would end up rounding out the top ten, but could have been as high as sixth in the final, which was scuppered by a formation change infraction.

Lowther now has a 17-point advantage going into the final round, ahead of Rob Ellis, with Lewis Smith (#84), Matthew Skaife (#43) and Louis Fleet (#22) rounding out the top five, covered by just 30 points.

Despite being the lowest grid on the entire ROTAX roster, the 177s still gave it their all at PFI, with Timed Qualifying giving a sign of things to come. Nathan Chafer (#2R) was fastest out of all ten drivers, but only 0.20 ahead of DHR’s Jamie Dzyra (#27R), with another privateer in the form of the #13 of Louis Large rounded out the top three. Timothy Darlow (#18R) could have potentially placed higher in qualifying, had it not been for a five-second front fairing penalty post-session, meaning he would end up seventh, behind Philip Haworth (#SC), Ben Cowley (#22R) and Tom Mountford (#78R), as the top six were covered by 1.87 seconds.

A three-way dogfight for the victory in heat one was narrowly won by Chafer, with Dzyra ending as the runner-up, just 0.37 seconds adrift. But it was only a further 0.36 seconds back to Cowley in third, who managed to get his way past several drivers, with both Mountford and Large retiring on laps one and four respectively. Haworth would end up fourth, leading a trio of Haworth Racing drivers, which also comprised of Cole Edwards (#E) and Rhys Llewellyn (#23R).

Chafer would have it a bit easier in the second heat, as Large was able to make up for what happened in the first heat by finishing second, 3.72 seconds off the #2. Haworth would take his first top three finish of the weekend in third, with Dzyra dropping down from second to fourt by the end. Cole Edwards would round out the top five, with all ten participants making the finish. 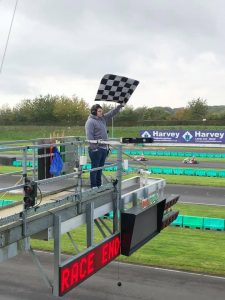 For the second successive race weekend of the current campaign, Chafer would again have a maximum score to his credit, after again getting away from the field, finishing ahead of Haworth by 6.26 seconds, who recorded his best result of the weekend. Dzyra would have to settle for third place, ahead of Cole Edwards and Darlow, who completed a very well spread out top five.

Even with only having attended rounds two and three, Chafer leads the overall standings on 120 points, with Sean Smith (#R64) & John Scott (#R66) not in attendance, putting the pair in second and third, with the top three only covered by nine points.

For all the results of the race weekend itself, head to the following link: http://www.apex-timing.com/goracing/results.php?path=/tvkc/2019/20191103