J.A.G. Engineering  extends team to include further promotion of the ROTAX brand

Following on from the recent 20th running of the ROTAX Max Challenge Grand Finals at the Circuito Internazionale Napoli in Sarno, Southern Italy, Official U.K. and Ireland ROTAX distributor J.A.G. Engineering have decided to bring UK-based commentator and social media professional Alex Goldschmidt on board. He is currently the official commentator for the ROTAX Max Euro Trophy and the BNL Karting Series, and will also now be working for ROTAX Max Challenge Germany for the forthcoming 2020 season. Along with working closely with us through social media and relevant press releases, Alex will also be assisting J.A.G. ROTAX at the 21st running of the ROTAX Max Challenge Grand Finals, providing social media coverage for Team GB, alongside his current commitment to Team Belgium. The dates for the event are to be confirmed by ROTAX themselves in due course. “Alex has been on our radar for a short while, but his impressive work at the Grand Finals in Sarno, really caught our interest,” explained J.A.G. Engineering’s Gary Sheail. “Having someone as versatile as Alex on our staff will help us further promote the ROTAX brand even further. He also does great work as an all-rounder, including some fantastic commentary in Europe, it helps to further strengthen what we do, as we look towards the future.” “I’m pleased and honoured to now be a part of the J.A.G family, and I’m really looking forward to helping them further their efforts within the ROTAX brand,” admitted Alex, whose work has already started post-Sarno, alongside his current work within the motorsport world. “There is a lot of work to be done, but it is incredibly positive for us all, and I’m excited to work with John, Jean, Gary and Tina over many exciting future developments.” 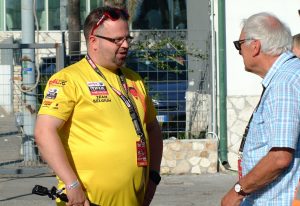 We look forward to working with Alex in the coming weeks and months, ahead of what looks to be an exciting 2020 season for J.A.G.