The 20th running of the ROTAX Max Challenge Grand Finals recently took place at the fantastic Circuito Internazionale Napoli, with a whole host of well-known drivers within the British karting fraternity heading to the Amalfi coast to represent Team GB. A total of nine drivers would put themselves to the ultimate test against the best ROTAX racers from all corners of the globe, as 360 drivers representing almost 60 different nations from the globe headed to the 1,547-metre circuit, based just 40 minutes away from Naples airport by car. The event would also include the final round of the DEKM (Deutsche Elektrische Kart Meisterschaft), where Team GB’s Bradley Barrett would be one of ten drivers looking to go for the overall title. It would be a week-long affair of both highs and dramatic lows for the squad, with the majority of them having to fight their way into the Grand Finals on Saturday, October 26th, where only 216 out of the 360 drivers would make It through.

The first-ever GB Micro Max participant, Macauley Bishop, who qualified via the one-off event at Forest Edge, as part of the 2019 Motorsport UK British Kart Championships, took the first win of the week itself. He then went on to take second overall at the Grand Final itself, having started in fourth place, joining new champion Jay Urwin (#5-NZL) and Mexico’s Salvador Trinidade (#6), who finished third, on the podium, after post-race penalties were issued.

It was a week-long struggle in the Mini Max class for Callum Voisin (#134), with the introduction of the Compkart chassis for the very first time. Callum, who has been racing in both the Mini Max and Junior Rotax classes throughout the season, would do his level best in the final. He would eventually finish in 27th place, having started in 24th, but would have been in the top 20, had it not been for a five-second front fairing penalty post-race. It was a French 1-2, with Jolan Raccamier (#124) and Andy Ratel (#128) drag- racing each other to finish 0.023 seconds apart after 12 laps, with Costa Toparis (AUS – #108), whilst a last-lap incident between South Africa’s Troy Snyman (#132) and Team Netherlands’ Jayden Thien (#127) put them both out of the running.

British vice-champion Tom Adams (#234) would be the sole Junior Rotax driver to take on 71 other highly-competitive drivers, placing 44th after qualifying practice, before the heats brought a myriad of ups and downs for the Coles Racing driver. Tom would secure some good finishes out of the three heats, including ninth in his final one of the week, but a sudden DNF due to an incident in qualifying heat two on the first lap, but him into Pre-Final B, where he would finish in P20, but not keep him in contention for the Grand Final itself. Adams would still progress and find that he would end up in 27th out of the best 72 Junior drivers from across the globe, having had his chances at becoming champion squashed earlier in the week. A quartet of very capable Brits would show that they were the class of the Senior Max field, as British Champion Guy Cunnington (#316) Euro Trophy vice-champion Rhys Hunter (#333), British vice-champion Oakley Pryer (#336) and BNL Karting Series vice-champion Clayton Ravenscroft (#369) made their presence felt in southern Italy, as all drivers were showcasing both their speed and racing prowess. All four would make it to the Grand Fina itself, with Ravenscroft leading home a British 1-2-3 in Pre-Final A, ahead of Cunnington and Pryer, with Germany’s Vincent France (#323) and Spain’s Axel Charpentier (#301) completing the top five. The Brits were just only 0.234 seconds apart after 15 laps of racing. Rhys Hunter would make it double bubble for Team GB in Pre-Final B on the Friday afternoon, taking a well-deserved win, just 0.164 seconds ahead of Ryan Norberg (#304), whilst Lachlan Robinson (#324-UAE), Aleksander Bardas (#350-HUN) and César Gazeau (#354-FRA), completed the top five. All of our Team GB drivers were in contention for the win, with being a part of seven drivers that would take their turn at the head of the field, with Cunnington waiting for his time to strike to go for the victory. According to the timing, he initially would pip Finland’s Axel Saarniala for the title of Grand Finals Champion by only 0.003 seconds, the closest of the weekend. But it would not stand, as the race was declared as a tie, with the Finn being awarded the title, based on the drivers’ respective fastest lap of the race, leaving the British Champion with a bitter taste. Ravenscroft would end up just off the final step of the rostrum by a mere 0.067 seconds in fourth, whilst both Pryer and Hunter would round out the top seven, with the latter being run off the circuit at turn two in the latter stages whilst running in second.

In the DD2 class Kai Hunter would get his first taste of non-direct drive competition, as the #474 had been running in both Junior and Senior Rotax classes throughout the 2019 season. He would be drafted in last-minute and would have to handle a steep learning curve. However, the young Briton would fight his way through the week and make it through to the Grand Final itself, being the last of our team out on track. Kai would start 34th at the beginning of the Grand Final itself and was showing good consistency throughout the 20-lap race, which he managed to get to the end of. However, a top-25 finish was denied, due to a five-second front fairing penalty being issued post-race, demoting him to 29th overall, only 16.348 seconds at the end of the race. Not a bad run on a unexpected class début.

It was a consistently upward trend, in terms of performance for our sole DD2 Masters driver, James Beacroft, who kept improving at Sarno throughout the week, fighting against some of the best DD2 drivers in class, including 14-time participant, Belgium’s Christophe Adams (#555) and Euro Trophy Open winner and Overall Champion, Austria’s Roberto Peseveski (#541). Over the course of non-qualifying practice, it was a chance for James to learn the subtle nuances of the 1,547-metre circuit, and with it, came the first time that he would break the 60-second bracket in qualifying practice (odds), which saw him take P10 in the session and P16 overall. With multiple top ten finishes during the three qualifying heats; including fourth in the first one, he put himself into a good position for Pre-Final B, putting him sixth at the flag. He would then go on to improve yet again and finish eighth out of the 72 drivers that had ventured to southern Italy, having started the Grand Final in 11th place.

Bradley Barrett (#607) would be competing in the last meeting of the DEKM, which took place as part of the Grand Finals, and was in clear contention, with the 10-strong field being visited by THUNDeR ambassador, R-Motorsport DTM driver, Ferdinand von Habsburg. He would end up running no lower than fifth place all week, having also taken the win in the first of two finals, with the last one seeing the Briton end up second behind Jasin Ferati (#609-CH) by a mere 0.391 seconds. This would be enough to see Barrett take third in the overall standings, behind Germany’s Luke Wloemer (#610), who would withdraw later in the week due to illness, with Ferati securing championship glory.

JAG ROTAX (Official UK & Irish Distributor) would like to thank all our Team U.K drivers, mechanics and supporters, Motorsport UK for their support and as always BRP-Rotax for once again putting on such an amazing event 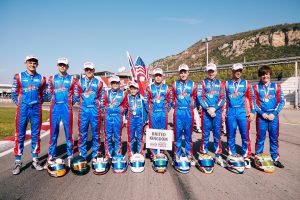 as the squad looks forward to the next Rotax Max Chalenge Grand Finals in 2020, with BRP-Rotax still to confirm when and where they will take place.