With development having started shortly after the racing début of the initial ground-breaker in the form of the ROTAX THUNDeR, the E20 is a project that will showcase the forward thinking of the Austrian brand, when it comes to futures within racing.

The new kart, which was demonstrated at the 1,547-metre circuit on the final day of the 20th running of the Grand Finals, showed that it was a distinct improvement over the THUNDeR, thanks to all the work going in-house for this new racer.

The E20 is currently in the prototype and testing phase, ahead of a potential début next year, which will more than likely be ready to compete in the DEKM.

“This is the logical next step in our e-kart strategy,“ explained General Manager BRP-Rotax and Vice President Sales, Marketing RPS-Business & Communications, Peter Ölsinger, at the unveiling on the penultimate evening of the event.

“The project E20 is developed by racers for racers and we are aiming it to be race ready by May 2020.“ 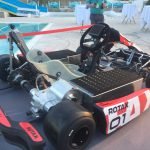 Due to ROTAX’s new baby being developed in-house, there will also be a better control on the reliability aspect, thanks to improved power characteristics, better weight distribution and handling properties, which will be able to be adapted towards multiple chassis providers.

Both motor and transmission are now integrated, with a separated inverter and brand-new Vehicle Control Unit. This is also assisted with streamlined and more powerful battery backs, which have also been reduced in size.

ROTAX have classed the new powertrain as the new “E-Unit,” which is better cooled, to help keep the karts out on circuit for longer along with better provision of the current boost function showcased on the THUNDeR. The Austrian brand has also stated that the driving experience, coupled with the added bonus of water cooling on the motor and inverter, will be close to the current enjoyment found with the ROTAX Max Evo engines.