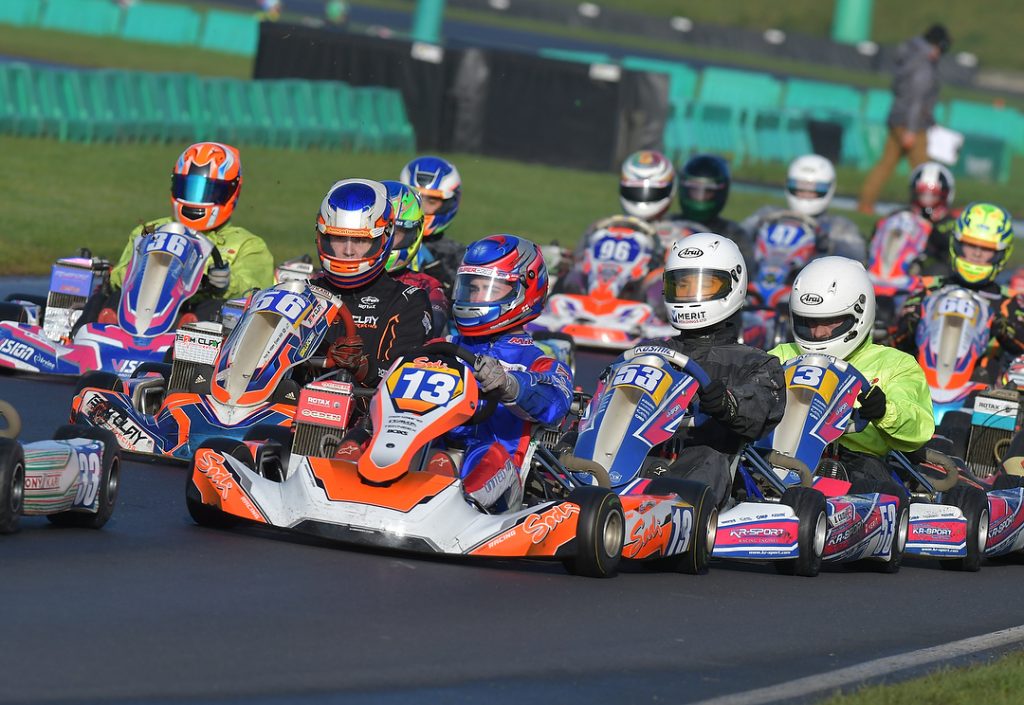 The Paul Fletcher International Circuit would host a very-highly packed and exciting second round of the 2020 Trent Valley Kart Club Winter Series this past weekend (February 1st & 2nd), amidst a mixture of both dry and wet weather conditions during proceedings, with 115 Rotax-powered competitors making their way to the 1,388-metre circuit just outside of Grantham, Lincolnshire.

16 drivers headed to the circuit, showing an increase in numbers after the first round, with Mckenzie Douglass (#24M) being the fastest of all in Timed Qualifying. The Coles Racing driver ended up posting a 1:02.12 lap time during the session, 0.32 seconds quicker than Project One’s Steven Duncan in the #16M, ahead of DHR’s Harry Linden (#21M), Rhino Goo’s Jez Williams (#68M) and Liam Wright Racing’s Alfie Gallagher (#14M), who completed the top five, who were separated by 1.09 seconds.

Heat 1 saw Williams make it across the finish line first after eight laps, having moved up from fourth on the grid, with Douglass, Duncan and Linden completing the top four, ahead Project One’s Jai Lawrence (#28M), who was fifth after starting down in eighth. Saltire Motorsport’s Connor Leishman (#43M) was able to make moves forward from tenth to sixth at the chequered flag, putting him ahead of Finn Smith (Team Clay Racing – #61M), followed by Alfie Davies (Pebble Racing – #74M) and Gallagher, who would have finished eighth, had it not been for a front fairing penalty.

Ben Raeburn (CHDD – #65M), who was unable to take part in qualifying, who come back from the back of the grid to cross the finish line in ninth, but would also be handed a front fairing penalty, demoting him back to tenth. Ben Crossley (Vision Motorsport – #56M), Pierson Bullock-Carter (Coles Racing – #15M), Joe Garaway (Privateer – #58M), Arthur Thacker (Racing Perfection – #22M, Lucas Jex (Privateer – #26M) and Michael Morgan (Privateer – 54M) completed the running order, with all 16 drivers making it to the finish.

Williams would make it two for two in the second heat, as both Douglass and Linden would be penalised post-race, with the former found to be breaking race formation before the start and Linden ending up with a front fairing penalty. Douglass would however still finish second again, just 0.71 seconds ahead of Duncan, with Leishman and Linden completing the top five. Lawrence would end up going up one place to sixth, ahead of Smith, whilst Gallagher would drop from fifth to eighth at the finish.

Raeburn would again showcase the same pace as in heat 1, as the CHDD driver would finish only 0.65 seconds behind the #14M in ninth, whilst Davies dropping a single place to round out the top ten. Bullock-Carter, Crossley and Thacker would occupy positions 11 to 13, with Garaway tumbling all the way down to 14th, ahead of Jex and Morgan, with the latter one lap off the leaders at the finish. 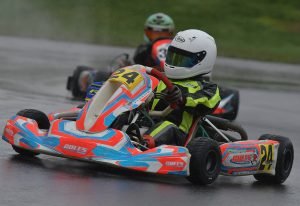 A turn of fortunes in the final for Douglass saw the #24M take the advantage and secure a welcome victory, taking the top step in a race that saw five different drivers handed penalties after the 11-lap encounter. Douglass would win ahead of Williams by 2.96 seconds at the finish, with the pair having dropped Duncan further behind them over the duration to complete the rostrum. Linden would have been on course for second at the end of the weekend, but the DHR driver would end up with two penalties, one for front fairing and the other for breaking race formation, putting him fourth, ahead of Raeburn, who again was on a charge, taking fifth.

Smith was just over two seconds adrift of a top five finish, taking sixth, ahead of Lawrence, Leishman, Crossley and Davies, who rounded out the top ten. Garaway was ahead of Gallagher, Morgan, Thacker, Bullock-Carter and Jex. Leishman, Gallagher and Thacker were the other three drivers penalised after the race, with Leishman also breaking race formation, and the other two picking up front fairing penalties.

With a heavily-subscribed entry in the Junior ranks totalling 53, it saw over the top half of the entire grid covered by just under 1.5 seconds, with the drivers separated into two groups, but it was the #75 of DHR’s Matthew Higgins that was fastest of all in Group B, ahead of team mate Harrison Collings (#5) by just 0.14 seconds, whilst Will Egby (Project One Racing – #76) and Mattie Hingeley (Ultimate-R – #14) making it a Group B top four after all efforts were tallied together.

Ultimate-R’s Gabe Fairbrother was fifth quickest overall, and the fastest in Group A, whilst Josh Vallance (MSport – #28), Sam Gornall (Coles Racing – #96), Luis Gardner (SPR – #32), Archie Kitching (Coles Racing – #17) and McKenzy Cresswell (DSM Sport – #31) completed the top ten, who were separated by only 0.49 seconds, showcasing how ultra-competitive it is in Junior Rotax.

Heat 1 out of three saw the first of two different winners on Saturday, with 16 penalties handed up post-race, all bar one being for front fairings, whilst Harri Reynolds from Coles Racing was deemed to have not completed a full circuit on lap 2, putting the #23 down in 34th place at the finish, whilst both Hingeley and NCR’s Jamie Keates (#44) did not start the race. Higgins would win by 13.63 seconds from Callum Voisin (Coles Racing – #35), with Gornall rounding out the top three. But with Rennie, Collings and a overtake-hungry Ryan Willis (Project One – #42) initially ending up ahead of the latter two, they would find themselves demoted back five seconds, putting them fourth, fifth & sixth at the finish line respectively.

Tiernan Rourke (#56) would profit significantly with some of the drivers being handed penalties, as the Team Clay driver would start down in 22nd, but finished up in seventh place, ahead of Duffell, whilst Ultimate-R’s Oscar Hoole (#58) started 18th and finished ninth, whilst Gardner would have to settle for tenth at the flag.

Egby would be the winner in the second heat, in what was a very-close fought race between the top four, who ended up being covered by a mere 1.15 seconds at the end, with the #76 finishing just 0.35 seconds in front of Collings, whilst Gardner rounded out the top three a further 0.25 seconds adrift. Duffell would be the first of three Coles Racing drivers in the top ten, taking fourth at the flag, whilst Linden would recover from 14th to complete the top five.

Joe Linden’s DHR team mate Daniel Armstrong (#12) would make up two places to finish sixth, ahead of Voisin, who would have finished in fifth, had it not been for a front fairing penalty, the only one out of the top 17 finishers in the race. Fairbrother would drop down from the inside of row two in third and would have to settle for eighth, ahead of Team Clay’s Jordan Morris (#25) and Kitching, who completed the top ten. Ultimate-R’s Finlay Harrison (#38) would start the race, but would retire on the very first lap, whilst Keates again was a non-starter.

Egby would edge out Higgins for the win in the final heat of the day by a whisker, as the #76 would be just 0.07 seconds ahead of the DHR driver at the flag, whilst Kitching took third, firstly behind Rennie, who was hit with a front fairing penalty, dropping the #74 from fourth to fifth, behind Vallance.

Hingeley would have a better run in this heat, after the DNS in heat one, starting in third, but would be happy with sixth at the finish, after Cresswell also took the hit for a front fairing penalty. Caitlin May (GMS – #52) and Lewie Weaver (GMS – #69) would finish eight and ninth, ahead of Reynolds, who recovered from his first race drama to round out the top ten.

21 drivers would line up at the 1,388-metre circuit for the B-Final, with the top four securing their places in the A-Final later on Sunday afternoon, but it would be the #38 of Harrison from Ultimate-R that would take victory after nine laps of racing by 2.22 seconds. SPR’s Ted Bradbury (#53) would secure the runner-up spot, whilst Joshua Wilby of Team Avago (#46) and Privateer Ollie Goodyear (#55) would take the final two positions in the top four. Henry Carter (Liam Wright Racing – #39) would complete the top five, ahead of Ewan McKenna (Saltire Motorsport – #92), Lexie Belk (Privateer – #98), Tyler Jex (Privateer – #24), Jack Cooper (Sait Motorsport – #77) and CHDD’s Oliver Martynski (#26). 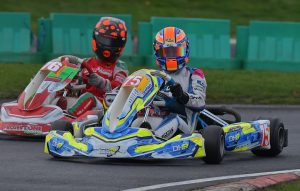 But Higgins would end up triumphant when it came down to the A-Final, as it would end up being a welcome result for Dan Holland Racing, with the #75 ahead of Collings in the #5 at the finish by a margin of 4.88 seconds, with Egby trying his hardest to finish second, but was kept at bay until the end of the 11-lap adventure, meaning he would end up on the final step of the podium.

Gardner, Gornall and Voisin would ensure that the remainder of the top six from fourth to sixth would be split by just 1.1 seconds at the flag, whilst Hingeley would take a well-deserved seventh at the finish, who made mincemeat of the opposition to make his way up to seventh at the flag, having started all the way down in 30th place. Kitching would end up in eighth place, 8.65 seconds off winner Higgins, with Tristan Rennie and DHR’s Armstrong rounding out the top ten.

Stay tuned for the second part of our Rotax report on round two of the Trent Valley Kart Club Winter Series tomorrow.