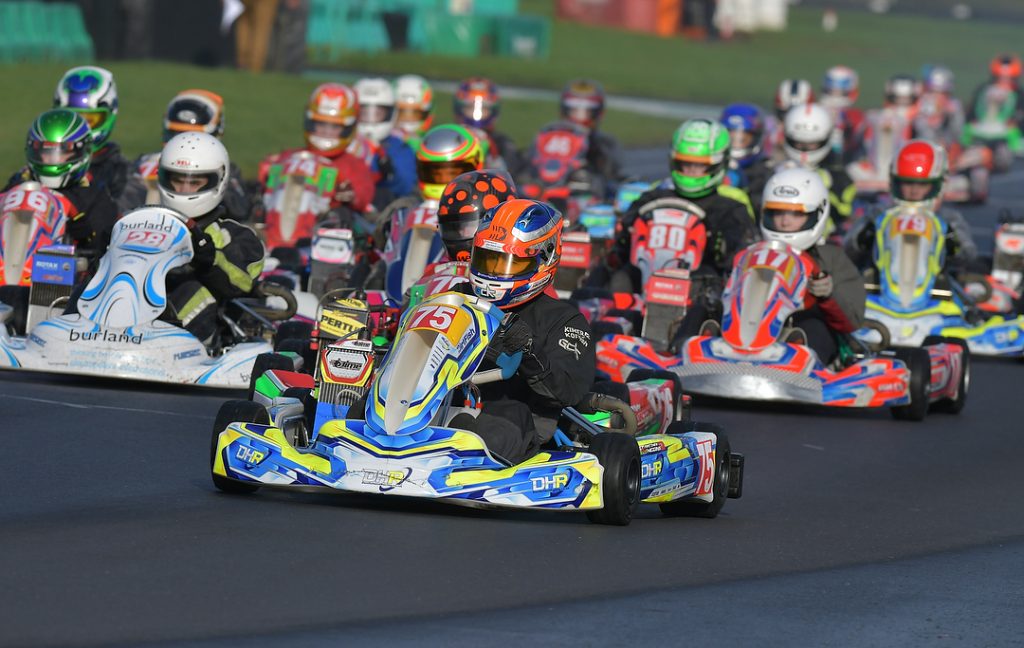 Following on from the Mini MAX and Junior Rotax action, the Senior Rotax class would be fully subscribed with a maximum entry of 36 drivers allocated, which would include a visit from Kayleigh Cole (Privateer – #18), who took the Tullyallen Senior Rotax title last season, as she looks to increase her efforts for 2020.

Timed Qualifying saw Privateer James Lingard (#33) hit the top of the time sheets with a 58.14 second lap time, in a session where the top 21 drivers were separated by just 1.01 seconds at the 1388-metre circuit. KR Sport’s Will Elswood was a mere 0.03 seconds adrift in second place, ahead of 2019 TVKC multi-award winner James Lowther (Privateer – #9) in third, whilst Ben Caisley (#53 – KR Sport) and Bradley Barrett (Sodi Vitesse – #4) completing the top five, covered by just a quarter of a second.

Heat 1 for Seniors would see Lingard take the first win, over 17 seconds clear of Coles Racing’s Tom Adams (#7), who would start down in 13th at the start, with the KR Sport trio of Elswood, Gifford and Caisley locking out the top five places. Barrett crossed the line in seventh behind Harrison, with the latter being one of nine drivers handed a front fairing penalty post-race, which put Barrett sixth. IPK UK’s Rob Ellis (#46) would move up the field during the eight laps from 16th to take the chequered flag in eighth, with James Johnson (Sodi Vitesse – #7) and Edward Matthew (Coles Racing – #85) completing the top ten.

Barrett would end up winning Heat 2 with a commanding 7.06 second advantage ahead of Burgess, with the pair having started third and fourth initially. Elswood would take a second successive third place finish over a further second adrift, whilst both Johnson and Lowther completed the top five, with the latter being demoted by a front fairing penalty, which could have seen him in third behind Burgess.

Harrison would take sixth, ahead of Adams, whilst Matthews and Halliday were able to keep their distance from tenth placed-driver Ryan Luscombe (DHR – #99) to secure eighth and ninth respectively, in a race that saw eight drivers receive front fairing penalties.

Burgess would make it three different winners in the heats, but would have to fight hard against Gifford for what would end up being the win, after Halliday finished first, but was deemed to have broken the formation before the race got underway, putting the Team Clay Racing driver down to third place. DHR’s Alexander Baker (#23) would be able to take a well-earned fourth place, having started twenty places further back, with Max Fitton from Ultimate-R (#28) rounding out the top five a further 1.38 seconds behind. 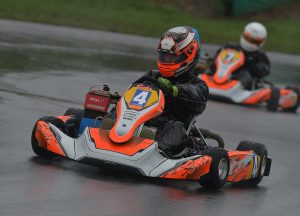 Caisley took sixth, ahead of Privateer Ryan Taylor-Trueman (#66), with the former crossing the line in what would have been a top three finish, had it not been for a front fairing penalty. Lunscombe made it into eighth place, whilst having gotten past Lowther by 0.07 seconds at the flag, whilst Lingard would suffer a front fairing penalty post-race, putting him into tenth.

But it was a début Final win for Barrett and the new factory-backed Sodi Vitesse team, taking the win by 4.90 seconds initially from team mate Burgess, but the latter would end up taking a front fairing penalty post-race, which dropped him to 11th. Elswood was elevated to second place, whilst Lingard stayed clear all race to round out the podium, less than a tenth off the KR Sport driver at the end of 12 laps of racing.

Johnson took fourth, fractionally ahead of Lowther, whilst the KR Sport pair of Gifford and Caisley finished in front of Harrison, Taylor-Trueman and Adams, whilst Halliday could have been up as high as ninth, but also had to absorb a front fairing penalty after the flag.

With a much more increased field of 11 drivers at PF International for the second round of the Winter Series, GMS Karting’s Chris Thomas (#56) set the pace in Timed Qualifying, posting a 58.97 best effort on his final lap in the session, 0;17 seconds quicker than the fastest of the privateers, Louis Large in the #13R. Nathan Chafer (Privateer – #2R) would be third fastest, ahead of fellow privateer entry Ethan Haynes in the #33R, whilst Ryan Garvey (SPR – #32R), and Sam Smith (SSMR – #36R) would set exactly the lap time, with Garvey taking fifth having set the time first.

Chris Wright (Privateer – #7R) would end up seventh, 0.54 seconds off the pace set by Thomas, whilst Ben Cowley (GMS – #22R) in eighth and Timothy Darlow (Privateer – #18R) in were the only other drivers to break the sixty second barriers during the session, whilst the D&J Racing pair of John Scott (#66R) and Sean Smith (#64R) rounded out the order in qualifying.

Chafer would initially cross the line first in Heat 1, but would end up runner-up behind Large, having been penalised for the front fairing being out of position. Sam Smith took third, ahead of Darlow and Haynes, who completed the top five. Thomas, who had started on pole position, would have his race ended on lap 2, having been shown the mechanical black flag by the race officials, and would not be the only non-finisher, due to Wright not even making it to the end of lap one.

Garvey was sixth ahead of Sean Smith, with Scott also making slight progress up to eighth at the flag, whilst Ben Cowley was deemed to have not completed the full distance of a lap at PFI on lap 8, putting him a lap down to being classified as the ninth and finial finisher of the race.

Heat 2 saw a change around for the majority of the field, as Large would again secure another win, this time 1.53 seconds ahead of Thomas, with Haynes rounding out the top three. Both Garvey and Sean Smith were at close quarters for the latter part of the nine-lap encounter for fourth and would be split by only 0.40 seconds at the flag. But Garvey would be demoted to fifth, after a post-race penalty was issued his way.

Chris Wright was classified in sixth, ahead of Sam Smith, who was the second driver to be hit with a post-race front fairing penalty. Cowley and Darlow also fell foul of the officials, finishing eighth and ninth, with John Scott finishing in tenth, whilst Chafer’s race ended abruptly on lap 2. 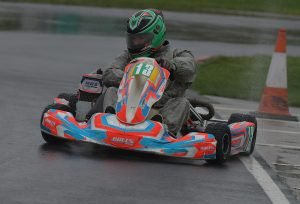 But Large would come out on top by a mere fraction, as it could have been a very different order for the top five in the Final itself, where the top three were split by just 0.67 seconds at the flag. Large would be just 0.06 seconds ahead of Round 1 winner Chafer, who started down in seventh place, whilst Sam Smith would hold station in third to complete the podium. Haynes and Cowley completed a closely-knit top five result, which saw all of the top five spread over just 1.41 seconds at the end of 11 laps of racing.

Wright was sixth, 2.22 seconds off victor Large, ahead of Garvey, who could have made it a very interesting top six, had he not been penalised, and could have finished up in sixth himself. Sean Smith was down in eighth, with Darlow, Scott and Thomas rounding out the order, with the latter dropping all the way from sixth to last, ending up a lap off the leaders.

The penultimate round of the Trent Valley Kart Club Winter Series takes place on February 29th and March 1st, as the drivers look to win their place on the grid for the 2020 Motorsport UK Kartmasters British Kart Grand Prix, which takes place between July 31st and August 2nd.