The forthcoming ROTAX Max Challenge Winter Cup, which takes place at Circuito Karting Campillos between the 21st and 23rd of February, will have a very special guest, who will be one of two new additions to the livestream team for the ROTAX Max Euro Trophy for the 2020 season.

“I’m pleased that Sarah will be alongside me at the forthcoming Winter Cup, which is looking to be a fantastic way to kick start the 2020 Euro Trophy season, that has over 250 competitors from almost 30 different nations who will head to southern Spain,” admitted Alex Goldschmidt, official Euro Trophy commentator, who is looking forward to working with in Andalusia.

“With a varied career over multiple disciplines, she will bring an interesting and exciting new dynamic to the event, which I am looking forward to finding out about.”

“It’s great to get back to the root of how my career started, when I jumped into karting at a young age, and it really helped me develop into the driver I am today,” admitted Moore, who is one of the 12 returning drivers for the second season of W Series, which gets underway at Russia’s Igora Drive circuit in late May.

Sarah is also a very active member within the LGBTQ+ community, which includes her ongoing work with Racing Pride, a UK-based initiative founded by Richard Morris and Christopher Sharp, that is spreading the word about further inclusivity with motorsport.

“To be asked to be a part of the Winter Cup and work in motorsport in a completely different aspect is an exciting challenge, and it is great to able to represent W Series and Racing Pride here, to help spread the word about how motorsport is changing, with many people knowing that we have to #RethinkRacing.” 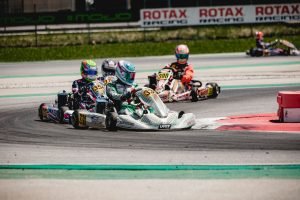 Along with Sarah, Silverstone-based commentator and presenter Anthony Jordan will also be joining the Euro Trophy livestream, working alongside Alex Goldschmidt as the official pit lane reporter for all four rounds of the main campaign, which commences on April 10th, 2020, at Belgium’s legendary Karting Genk circuit, based in the Limburg region.

Having worked in the UK motorsport scene for the past few seasons in both two and four-wheel racing categories, the Briton will bring his own style to the ROTAX Max Euro Trophy broadcast platforms, which are provided by both promoter Camp Company GmbH and Downforce Radio, who becomes the dedicated audio stream partner for 2020.

“I’m thrilled to be a part of the ROTAX Max Euro Trophy for 2020,” admitted Jordan, who is looking forward to a new step in his career, as it will be his first assignment in Europe.

“I can’t wait to be in the paddock, getting to know the drivers, teams and make new friends and memories. To be a part of this championship for the forthcoming season is definitely a step up, and I can’t wait to get started.”